The structure consists of 5 rooms, each of them is inspired by the characters of the movie “Il Postino”.

All rooms are finely appointed with a modern design; they have a private bathroom with hydromassage shower, hairdryer, complimentary toiletries and clothesline.

The accomodations are also equipped with TV 32″, wifi free, air conditioning, mini-fridge and safe box in order to guarantee to the guests a maximum comfort in a total relax. 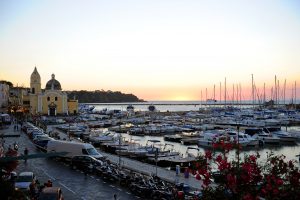 “L’isola del postino” B&B is situated in the charming case of Marina Grande, the focal point of the main commercial and entertaining activities of the island of Procida, approximately at 400 metres from the main dock of ferries and hydrofoils and from the buses and taxi parking, it’s already visible from the sea and is easily to access.

“L’isola del postino” B&B is situated in the charming case of Marina Grande, the focal point of the main commercial and entertaining activities of the island of Procida, approximately at 400 metres from the main dock of ferries and hydrofoils and from the buses and taxi parking, it’s already visible from the sea and is easily to access.

The origins of the name of the island are lost between reality and legend. Among the most evocative hypothesis is one that derives its name from the Greek “proketai” meaning “lies”; Procida in fact ,if you look closely at the morphology of the island you’ll find that it looks lie lying in the sea.

Procida, with an area of about 4 square kilometres, is the third in size of the parthenopean Islands. Once you come for the first time, you will return always willingly.

Procida is a real open air – movie set, in fact, was chosen by many directors as a location for over 35 notable films, mainly for its views and its typical Mediterranean architecture. Among these can be mentioned, as examples, “The Postman”, with Philippe Noiret and Massimo Troisi, “The talented Mr. Ripley”, with Matt Damon. “Francesco e Nunziata” with Sophia loren, Giancarlo Giannini, Raul bova, directed by Lina Wertmuller. Furthermore  “Castello D’Avalos” instead provides the setting for the film’s dramatic prison “Detenuto in attesa di giudizio” with Alberto Sordi.

Read more
This site uses cookies, including third parties, to provide services that are in accordance with your interests. By continuing to browse you consent to the use of cookies.   More info OK
Cookie Policy

This website uses cookies to improve your experience while you navigate through the website. Out of these, the cookies that are categorized as necessary are stored on your browser as they are essential for the working of basic functionalities of the website. We also use third-party cookies that help us analyze and understand how you use this website. These cookies will be stored in your browser only with your consent. You also have the option to opt-out of these cookies. But opting out of some of these cookies may affect your browsing experience.
Necessary Always Enabled
Necessary cookies are absolutely essential for the website to function properly. This category only includes cookies that ensures basic functionalities and security features of the website. These cookies do not store any personal information.
Non-necessary
Any cookies that may not be particularly necessary for the website to function and is used specifically to collect user personal data via analytics, ads, other embedded contents are termed as non-necessary cookies. It is mandatory to procure user consent prior to running these cookies on your website.
SAVE & ACCEPT